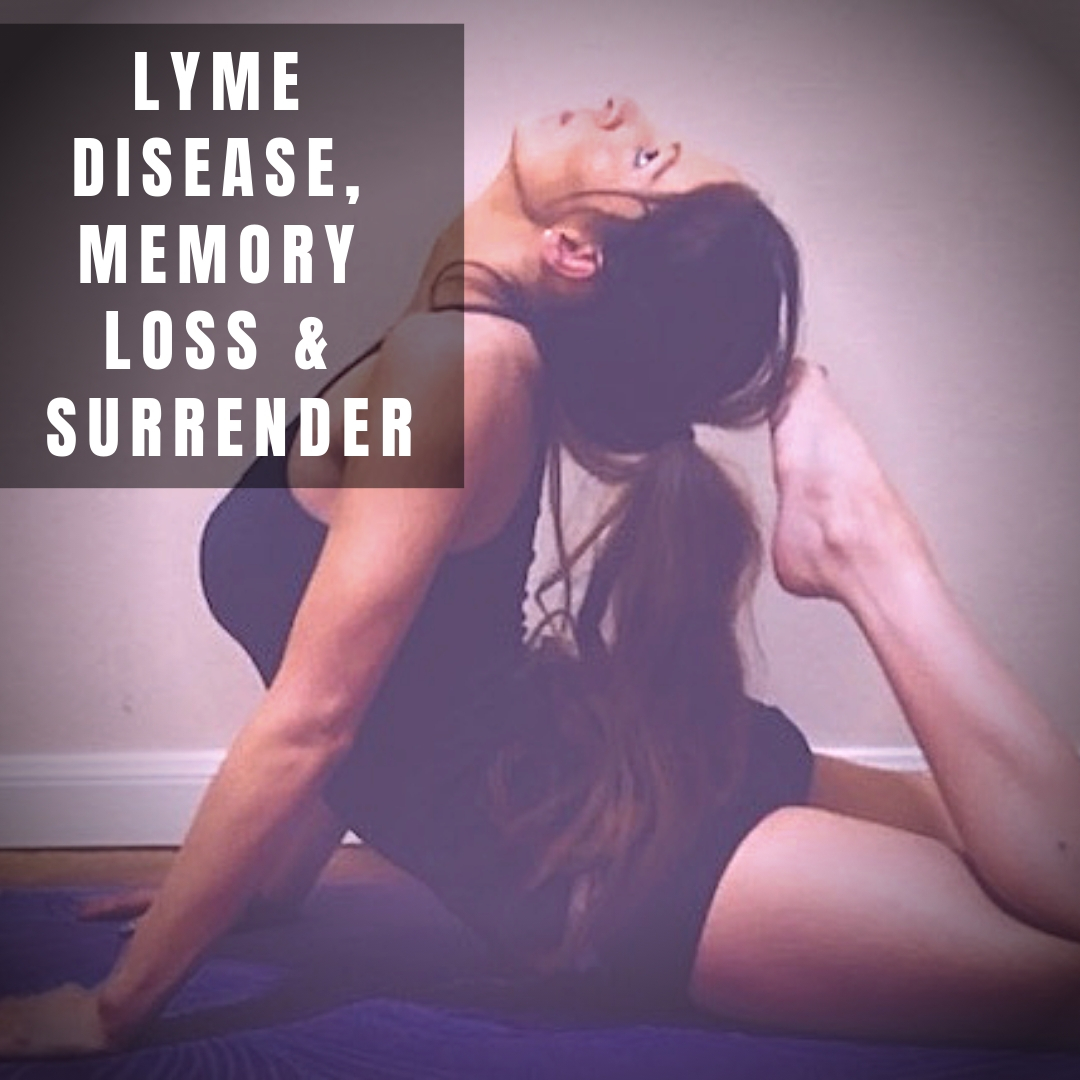 “…the divine essence of the universe radiating through my soul. I do not have to see this truth. I do not have to hear it. In no way do I have to make an effort to remember it, because I always feel it …The beating of my heart is a constant kiss from my soul.
…I guess that’s the punchline: to unveil the truth which all others point to. …The truth of the sacred mystery of life, constantly holding my hand”.

I recently found this in a mix of old things I wrote. It is from four years ago, but rings true, so I thought I would share. It briefly tells my story of falling debilitatingly ill with Lyme without overwhelming , and more importantly describes one of the many life long lessons it instilled in me:

I stare at the blank paper, trying to remember what I sat down to write. I then remember what I am going to write about, but in no way do I know what words I am about to say because I am a twenty-four year old with severe short term memory loss and random bouts of amnesia, which reminds me, THAT is the story I am striving to tell you.But the lesson, the silver lining of it all? Well, that will unfold for me at the same rate as it does for you. I am writing this in the same way you are reading it, unaware of which word will come next, my curiosity equally eager to get to the end and unveil the punch line. By then, I will have already forgotten all the small details composing the sentences I plastered together in the beginning. So, I will go back and reread it, and it will be as if I am reading an article written by a stranger for the first time. It will be as if I am you, registering my own words from your eyes.

It was not always like this, I was not always like this. Despite the occasional downfalls everyone experiences once in awhile, I grew up surrounded by joy and an abnormally excessive amount of laughter for the most part.  My biggest stressors were having too many friends and not enough time to be there for all of them, what outfit I would wear to a high school party, and how I would go about sneaking out to make it to the party because I was still in Middle School.  Yes, I was careless and irresponsible. But , on most days, I had fun from the moment I opened my eyes each morning until my abounding energy pushed me into exhaustion and I shut my eyes at night. Some might say I was “bad,” that my carefree behavior was against the teachings of God, and that I should have spent more time being disciplined in my studies and focused on my “responsibilities.” But if there is one thing I know for sure, it is that I was not wrong, and I am grateful for the years of freedom I was given. I was focused on what I needed to be doing -having fun, void of discipline, and foreign to responsibilities; because in a few years, I would fall seriously ill and lose all independence. Me, the girl who was always told she was so full of life, would be sucked dry of it. My lights would
go out, and into a deep debilitating darkness I would wander.

Three years ago, on a beautiful spring morning in 2011, I rolled out of bed to brush my teeth and fell to the ground, unable to move or make sense of my surroundings. When I finally came to enough, I relentlessly struggled to pull myself back into bed -my new found safety net. But my bed was high, and I failed repeatedly. Just the same, I tried repeatedly. Exasperated, I finally made it.

Grasping for my cell phone, shaky fingers scrolled through the contact list of my blackberry to call my mother. She answered with a cheery “hello,” but I failed to deliver on the other end. Forgetting who I was talking to, or why I was even holding a phone to my ear, led me into a state of dumbfounded confusion. After a few moments, I regained enough clarity to remember it was the voice of my mother reaching out to me on the other end of the line.

“Hi,” I squeaked.  A polluted mind mixed with bone-chilling terror made sure it was the only response I could muster.

Little success came from the rest of our conversation. Formulating answers to simple questions such as, “how are you” felt like climbing Mount Everest. Finding appropriate words to describe my current situation was out of question at this point. To the best of my memory, and from what I have been told, we talked very little during that conversation. My mother was worried, but it was not until a few weeks later when she Skyped with me and saw my pale skin, dark circles, and my body that was rapidly withering away because I had lost over twenty pounds within a matter of weeks, that she understood something was very, very wrong.

I was living in North Carolina at the time, without a single loved one in the entire state. Following our conversation, or lack there of, she immediately purchased airline tickets and flew in from Texas the next morning at the crack of dawn. We shuffled about from one doctor to another, each of which either thought I was a hypochondriac, an addict faking my symptoms to obtain controlled substances, or just down right insane. After all, I did have well over thirty symptoms at the time, which is likely to scare anyone away. Even rarer was the fact that they developed so rapidly, especially since I was only twenty-one.

Returning to my condo after one particularly upsetting doctor’s appointment, a haze of defeat settled in, polluting my soul and spirit with a smog not unlike the ones sparked by toxic environments in big cities. By then, I could no longer read, write, walk much, carry on a conversation, or even watch a movie. At best, I could muster up ten to twenty minutes of brain power to attend to an urgent matter.

Pleading for anything to pull me from my trance-like state, in which I silently stared at my ceiling fan for hours on end, my mother finally succeeded in getting me to conjure up enough energy to watch something on Netflix. Even though I could not follow a storyline, she insisted I pick what to watch. As double vision would have it, my choice depended solely on the creativity of the movie covers rather than their titles or descriptions. One particular cover caught my attention, gripping my heart with an iron fist. The picture on the cover haunted me.

“Watch it,” a strong voice within said.

And so we did. It was a documentary about Lyme disease, called “Under Our Skin.” By then, I had tested negative for Lyme disease more than once, and I in no way thought I had it. However, the resemblance between my symptoms and one of the girl’s on the documentary were unparalleled. Convinced the tests were wrong, and that we were meant to watch that documentary, my mother made me an appointment with a doctor from the documentary for the following Monday. Within days we were on our way to Washington D.C. to see a Lyme Literate Infectious Disease Doctor.

We found out the Lyme disease tests I had taken were only 30% accurate, so my doctor ordered more reliable and extensive testing for me. Sure enough, I tested positive for Lyme disease, Lupus, and a few other infections. I have been in treatment ever since. If we would have never came across that specific documentary, it is highly likely I would be severely autistic, psychotic, or dead by now.

To this day, there is no rational explanation as to why I randomly chose to watch a documentary on Lyme disease, a documentary that turned out to literally save my life. I am not sure why this happened, just that it happened.

Really, I am not sure it matters “why” anything happens. Rather, it matters what we do with what happens. It matters that we make it count.

I have gone through a lot in the past three years, all of which is mostly a blur. When I read my journals, I feel as if I am reading a story of someone else’s life. I do not remember much, which I have finally come to peace with.

Some things do not require a properly functioning memory, though. The particular thing I speak of is a part of me, the divine essence of the universe radiating through my soul. I do not have to see this truth. I do not have to hear it. In no way do I have to make an effort to remember it, because I always feel it. The beating of my heart is a constant kiss from my soul.

And I guess that is the punchline, the purpose of it all -to unveil the truth which all others point to. The truth of the sacred mystery of life, constantly holding my hand.